NEWARK, DE—Students and allies from the Northeast region, including a busload from Rutgers New Brunswick campus, protested Sallie Mae’s predatory lending practices on Thursday May 30.

The protest, which had two components, took place at Sallie Mae headquarters in Newark, Delaware.

A group of students were present at the shareholder’s meeting where they attempted to pass a resolution that called for more transparency in Sallie Mae’s lobbying and loaning practices. Although this resolution was not passed, the students succeeded in scheduling a meeting to voice their concerns with CEO John Remondi.

Outside of the shareholders meeting, over 100 students marched and participated in a demonstration led by New Jersey United Students (NJUS), Student Labor Action Project, Jobs With Justice and several other student groups and allies.

Delaware State Police intimidated the protestors, according to NJUS president Marios Athanasiou, who said they “swung batons and beating sticks back and forth, flicked pepper spray holsters open and closed, and brought out dogs” 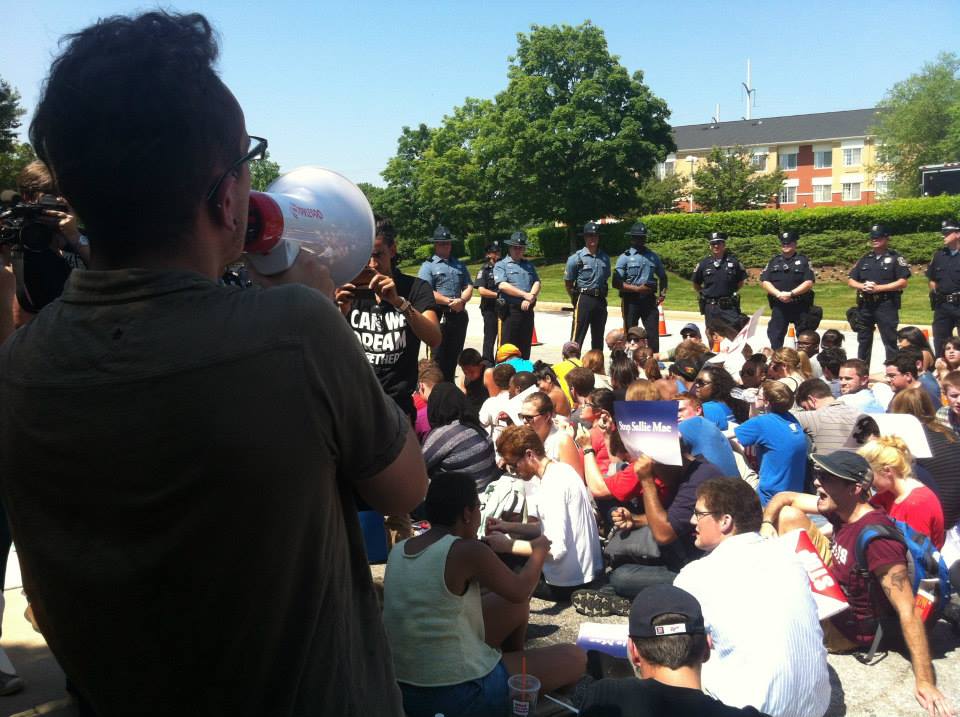 While the police read the marchers their rights over a megaphone, the protestors “broke out into a beautifully sung ‘We who believe in justice cannot rest’” and continued the march.

Student groups plan to register the youth vote and encourage them to vote for representatives that will fight with them against the systems that exacerbate the ongoing student debt crisis.

The United States Students Association, the largest student organization in the country, is supporting the Student Loan Affordability Act, also known as the Reed-Harkin bill, which would stablize the interest rates on Stafford loans at 3.4%.  If no action is taken, the rate will double to 6.8% on July 1.

NJUS plans to pressure the Consumer Finance Protection Bureau to “ hold corporations accountable and take action toward predatory and illegal practices to ensure that the crisis of student debt doesn’t continue” said Athanasiou.

Other groups, such as the American Federation of Teachers, the American Association of University Professors, Service Employees International Union, and New York Students Rising are also joining the fight against overwhelming student debt.

The goals of this movement are to provide support to borrowers, to address the declining affordability of higher education, and to reject the privatization of student loans.

Anthanasiou argues that the student debt crisis “places a road block in the paths that young people take…[and] if we fail to address this now we are only giving ourselves the future of an uneducated and unempowered workforce”.