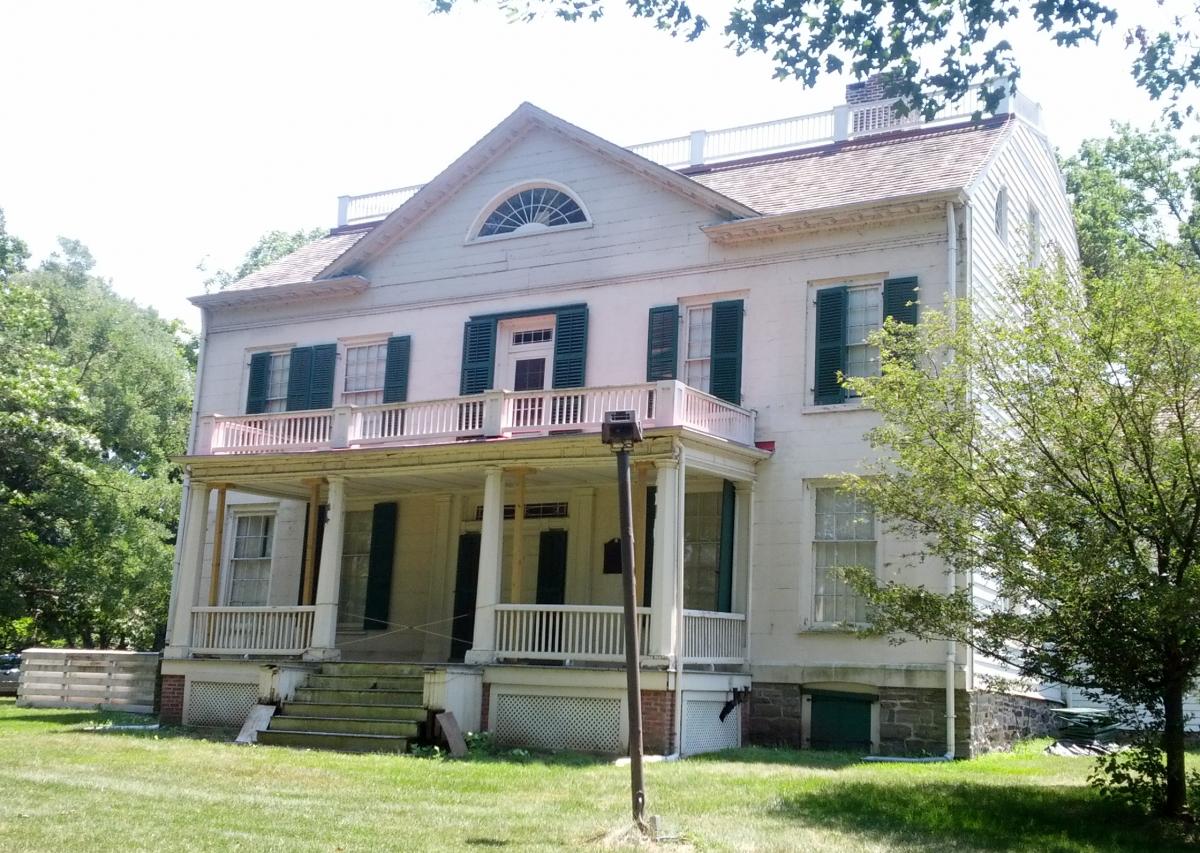 NEW BRUNSWICK, NJ—There was a time before the grease trucks, or any trucks at all for that matter.  Back when churches were the tallest structures in the city, and long before women and men would share the same classrooms at Rutgers.

Imagine, if you will, a time when what is now the Grease Trucks parking lot was an enormous mansion belonging to the Johnson clan, when a vast network of streetcars ran along trolley tracks throughout the city and the region.

Many buildings were still lit by gas as well as electricity, and what is now state highway 18 was an enormous industrial waterfront.

Factories lined the river, and freshmen wore beanies at Rutgers University, while huge military forces mobilized across the ocean for what we now call World War I.  Because of the global conflict, many of New Jersey's factories were cranking out ammunition for the war effort.

The weather was warm, for it was the early summer of 1916. Already, munitions were piling up on an island near Jersey City called Black Tom, and, on July 30, that island would go up with a bang, courtesy of German saboteurs. That explosion broke many of the windows in downtown Manhattan and was likely heard in New Brunswick.

Enter Sarah Comstock, a fan of history with a love of regional travel, seeking out spots belonging to even earlier "olden times."  Comstock's specialty was the American Revolution and colonial era that preceded it.

Indeed, she notes that it was not originally called New Brunswick, but Prigmore’s Swamp and then Inian’s Ferry, after original “landowner” Prigmore and ferry operator John Inian, respectively.

Her target that day was the Buccleuch Mansion, one of the oldest homes around.

Comstock points out in her writing that it took a committee of fifty women to research the history of that old house and to preserve it.  To this day, the historic mansion is still looked after by the Daughters of the American Revolution.

The mansion and surrounding lands were given to the City of New Brunswick in 1911, just five years before Comstock made her visit.

The Pennsylvania Railroad's steam locomotive, followed by a chain of Tuscan red coaches, pulled into New Brunswick’s train station, which opened in 1903 and is still standing today.  Though she could have walked to Buccleuch Park from there, Comstock, instead, looked for the trolley that ran down Easton Avenue towards Bound Brook (which she later misremembered as the “Eastern” Avenue trolley).

Comstock hopped off the trolley and walked through the blossoming park to the Buccleuch home, noting several interesting historical facts in her writing.  The mansion was once called the White House, after original owner Anthony White, who was the father of one of George Washington’s brigadier generals.

The property was eventually sold to William Burton, and then got confiscated when the American Revolution erupted, where it was promptly occupied by a revolutionary, Captain George Janeway.

Interestingly enough, he moved to New Brunswick because of a red letter “R” on his doorway.  Today, we think of large red “R”s today as a symbol of regional pride in Rutgers.  Back then, the letter stood for “rebel” and was a sign that you were in trouble with British authorities.

During the Revolutionary War, the British came into New Brunswick and took over several houses, including Buccleuch.  After the Revolution, Colonel Joseph Scott, a descendent of the Scotch Dukes of Buccleuch, bought the house and thus gave it its current name.  His grandson, Anthony Dey, deeded the house to the city government upon his death in 1911.

In his will, Dey gave the land and mansion to the city on the condition it be preserved as a public park.

At the time of Sarah Comstock’s visit, in 1916, the walls at Buccleuch Mansion were still decorated with old wallpaper that depicted scenes of French buildings such as Notre Dame and the Tuileries.  Marks and notches supposedly left by bayonets decorated parts of the house, and there were several historic items that fascinated Comstock, including a wigstand.

She also noticed a dilapidated barn near the house, which still had Revolutionary-era bullet holes in it.  But she noted that the barn was set to be torn down before long.

Comstock then made her way back to Rutgers College, where “fraternity boys now saunter in modern tweeds and checks under its venerable trees.”  She wrote that the students “elevate their dapper tan feet to the porch rails” and “collect sofa cushions embroidered by the girls.”

She now turned her attention to Albany Street, which is said to have been the original post road through town, named for the Dutch families who came from Albany, back in the 1730's, to settle in two rows of wood and brick houses.

Gone were the Neilson house, once occupied by British general Howe, and the Van Nuys house, which had been occupied by the Hessian commander.  There had once been a Vanderbilt Hotel, run by none other than Cornelius Vanderbilt, of New York Central robber-baron fame.

One controversy at the time of Comstock’s visit is whether or not Washington was actually headquartered in New Brunswick. The building in question had long been torn down by 1916, and a memorial placard already marked the site on a newer building.

A man named Pop Haggerty may have served his memorable baked beans at a 19th century restaurant in the “Washington headquarters”, the fame derived from the building’s alleged history.

In any case, Comstock noted other trivia about the heroes and villains of the American Revolution.  She took notes and eventually typed them up, ultimately to be printed in the June 18, 1916 issue of the New York Times, on page X8, under the headline “A Summer Journey to Old New Brunswick.”

A year earlier, Comstock had published a book titled "Old Roads From the Heart of New York: Journeys Today by Ways of Yesterday, Within Thirty Miles Around the Battery."  An excerpt about New Brunswick :

Returning to the main road running south from Elizabethtown and Rahway, the old Middlesex and Essex Turnpike, you continue to New Brunswick. This town was once Inians' Ferry, named for one John Inians; previous to this, during the Seventeenth Century, it had been Prigmore's Swamp. The first inhabitant is said to have been Daniel Cooper who kept a ferry, his home being at the point where the post road of later years crossed the river. About the year 1730 a group of Dutch families from Albany,  New York, arrived here, built themselves houses from the building materials they brought along with them, and named the road upon which those houses fronted, "Albany Street". The settlement now began to wear the appearance of a budding village.

NEW BRUNSWICK DURING THE AMERICAN REVOLUTION

It continued to grow, and at the time of the Revolution was a town of importance. Its history during that war was full of distress, for New Brunswick lay in the path of both armies as they repeatedly crossed back and forth through the State. It passed from the hands of the Americans into the hands of the enemy, and during the winter of 1776-77 it was occupied by the British, under Cornwallis.

Here the enemy made themselves at home for a long stay. Howe himself had headquarters in Burnet Street, in the home of Neilson. The Hessian commander was in the Van Nuise house in Queen Street. A post was erected at Raritan Landing, another on Bennet's Island, two miles below the city; there were fortifications built on the hill beyond the theological seminary; British officers took and occupied the houses of citizens here and there; and the encampment was made on William Van Deursen's property, below New Street.

For six months the British owned the town, and the citizens were subjected to all the misery of such a situation. All their schools, churches, and business had to be closed, many had to surrender their homes, barns in the surrounding country were torn down to furnish timber for a temporary bridge across the river, and the farmers were compelled to hand over their stores to the greedy enemy. But although the period of occupancy caused great suffering among the American citizens, the British were not left in peace.

Several American officers with high-spirited patriots under them caused the British considerable disturbance. At one time, during the latter part of the winter, the enemy became cut off from supplies, the base being at Amboy. They looked for relief from a fleet loaded with provisions, which it was planned to send up the Raritan River. But the Americans planted a battery of six cannon on the shore, and just as the fleet was rounding the point in the morning the cannon opened fire – to the end that five boats were disabled and sunk, the remainder sent back, a sadder and wiser fleet, to Amboy.

Captain Hyler, famous for his gallant, adventurous spirit, commanded several large whaleboats, and a gunboat, the "Defiance". He made a business of troubling the enemy's trading-vessels and plundering parties, going forth to any spot where he knew them to be – off Sandy Hook, near Staten Island, down the Raritan, and so on. One of his excursions resulted in the capture of five vessels in a quarter-hour's work.

And so, by skirmishing with the British outposts about New Brunswick, by interfering with their supplies, by meeting and driving back their foraging parties emerging from the town, several American officers caused this half-year to be one of not undisturbed peace to Howe and Cornwallis.

So, what would Comstock think of the early 21st century, if she were to come down and visit New Brunswick today?  Indeed, she would likely be disappointed about some things and delighted about others. She’d likely lament the continued wanton destruction of New Brunswick historic sites, but she’d be pleased that Buccleuch still stands, under the auspices of the Daughters of the American Revolution.

She could not help but notice the extraordinary number of automobiles running around New Brunswick and be surprised by the decreased offerings of public transit.

She might be interested in the fact that New Jersey's name now graces the railroad trains, as opposed to the Pennsylvania Railroad, and that buses have replaced or forced out every trolley service in the region.

Comstock would probably be aghast at the replacement of an enormous chunk of some of the city's most historic areas with Johnson and Johnson’s worldwide headquarters and the Hyatt Regency hotel, as well as the continued development and expansion of Highway 18 through a once-vibrant community.

On the plus side, she'd be pleased to find men who are interested in historic preservation, as she considered it mostly a woman's field.