NEW BRUNSWICK, NJ—The City Council’s five members are poised to adopt an ordinance that would to ban smoking in all city parks and other city property.

A final vote scheduled for tomorrow will be preceeded by a public hearing where the council will hear questions and comments on the ordinance from anyone.

The hearing will take place at the council’s regular meeting, held on the top floor of City Hall at 6:30pm.

Council President Rebecca Escobar, herself a smoker, has said publicly that she supports the law. “I think it would be a great thing to have in our city,” Escobar said at an April meeting.

“Especially coming from a smoker, I know the effects that it have, and I think we will be sending our kids a message that it is something that’s detrimental to our health and to our communities,” she said.

If the proposal becomes law, it’s unclear whether Escobar will still be allowed to light up in the City Hall parking lot.

Escobar’s colleagues Elizabeth Garlatti and John Anderson also expressed their support for the concept when it was proposed at an April 17 meeting.

Councilmen Kevin Egan and Glenn Fleming asked questions about the proposal, but seemed to also support it.  All five council members voted to schedule the law for a final vote.

A representative from the American Cancer Society and Tobacco Free for a Healthier New Jersey coalition presented the case for banning smoking in parks, saying it would be “advantageous” to the local community.

Among the benefits would be a decrease in secondhand smoke and litter from cigarette butts, she said.

But the representative asserted that the most important reason for the law to be enacted would be to set a good example for our city’s children.

“The biggest reason for me is simply as a role model for our children,” the representative told the council.

“The fewer people the children see smoking the less likely they are to think that it is something to do. This is not to take away someone’s civil liberties, but to have children grow up to a generation of non-smokers.”

Councilman Anderson agreed: “Anything that we can do to set an example for our children, that’s the best.” 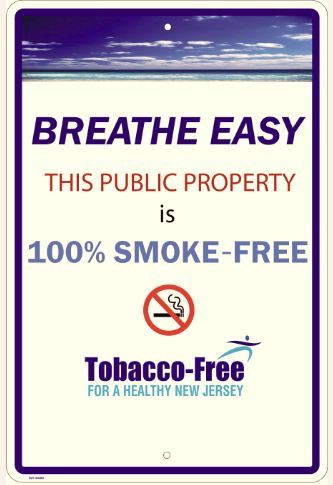 City resident Mark Lanzhoff said he supported the proposal, but raised concerns about how this ordinance would be enforced.

Lanzoff said the city posted signs indicating a ban on skateboarding and cycling on sidewalks, but “it still goes on.”

Under the proposal, fines for first-time violators are set at $50, while repeat offenders would face fines of $100 for a second offense and $150 for each subsequent offense.

The law would empower the directors of the parks and housing inspections divisions of the city government to designate employees in those divisions to provide enforcement.

Of the 566 municipalities in New Jersey, roughly 170 adopted similar ordinances that ban smoking in areas owned by the town.

One of Middlesex County’s two other cities, Perth Amboy, is the latest local government in New Jersey to ban smoking in its parks and recreational areas, according to an article on NJ.com.

Banning smoking in public places is becoming a growing trend in New Jersey communities, and Rutgers University’s campus may be next.

State Assemblywomen Celeste Riley and Connie Wagner proposed a state law that would ban smoking as well as the use of smokeless tobacco in any public or private colleges.  The Assembly has yet to take action on the bill.

The representative pushing for the New Brunswick ban ordinance said New Brunswick’s leaders could inspire other towns to take steps to ban smoking in their parks and recreation areas.

“New Brunswick, as an urban area and being well-respected, could very well be an example to other towns,” said the representative.

If the ordinance is approved at tomorrow’s meeting, Mayor James Cahill will decide whether or not to sign it into law.  It would take effect twenty days after it is signed into law.

A spokesman for Cahill did not respond to a request for his position on the proposed law.