Their conference was delayed several months due to Hurricane Sandy, which struck less than a week before the original date in November.  When the conference returned, disaster preparation and the recent hurricane dominated the speeches and discussions.

Sessions ranged across topics from transportation to the relationship between planning law and planning practice, to communications, fundraising, sustainability and regulating land uses.  The recovery from Hurricane Sandy was an important topic, with more than one session dedicated to disaster recovery.

The keynote speech, given by Jaap Kwadijk, dealt with the struggles of the Dutch to keep floodwaters away from their land.  Sixty percent of the Netherlands is prone to flooding, because much of the country is below sea level.

Kwadijk, the director of science and chairman of the Deltares Scientific Council, a water-related environmental think tank also specializing in infrastructure.

It was sixty years to the day before Kwadijk’s speech that the Great Flood of 1953 inundated the southwestern parts of the Netherlands, killing 1,836 people and destroying around 10,000 buildings.

In the wake of that flood, the government of the Netherlands formed the Delta Commission, which made recommendations and suggested improvements. A second Delta Commission was formed in response to flooding along the rivers in 1993 and 1995.

In 1993 and 1995, the Netherlands’ rivers flooded.  The Dutch planners’ response was a program called Room for the River that involved massive reconfiguration of the nation’s dykes and polders, reducing the height of groynes (low walls or rock piles sticking out into the water, or running alongside waterways), creating new floodways, and enlargening other floodways, all to make room for a river to flood in. Obstacles and embankments were removed, and the main channels were deepened.

Kwadijk gave an overview of climate change and how it would affect the Netherlands. There would be more rain, more evaporation, and higher storm surges. Water would get saltier and warmer.

Most importantly, there would be more flooding. For planners, there was a risk – a political risk: the Netherlands might gain a reputation of being unsafe for investment, leading to economic disaster.

The commission and Parliament agreed, implementing flood risk management programs with a three-tiered approach: protection, land use and infrastructure planning, and preparedness for the worst.

A second speaker, Laurie Johnson, pointed out other disasters of the past two decades, including Hurricane Katrina, the Tohoku earthquake, and the New Zealand earthquake, and how planning agencies in the affected areas responded to them. This second speaker then made suggestions for the improvement of planning practices that respond to disasters.

Johnson is a scholar of disasters, the economics of catastrophes, responses to cataclysms, and recovery from disasters, and she is also a consultant in that field.

HISTORY OF FLOODING IN NEW BRUNSWICK 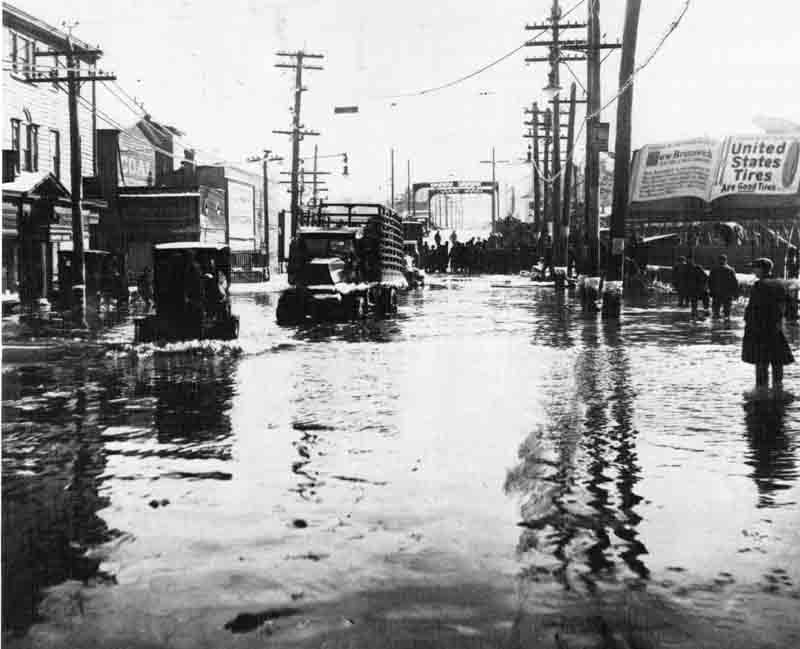 Here in New Brunswick, the Raritan River has flooded numerous times over the past few hundred years.

The floods have extended to New Brunswick, but were not as severe as they were at Bound Brook.

In a major flood, Boyd Park and a stretch of Route 18 generally gets flooded, as well as the basements and lower floors of low-lying buildings closer to the river.

The lower divider between the Delaware and Raritan Canal might not be seen in such floods, and the major floods leave behind a muddy residue around the flooded area. The boathouse may be flooded up to the roof, but the rest of the Rutgers campus typically stays above the water.

The alma mater of Rutgers, “On the Banks of the Old Raritan”, mentions flooding. It may have been the flood of 1810 that was referred to, as Old Queens’ cornerstone was laid in 1809 and the building was occupied by 1811. The song itself was written in 1873.

There is a growth-oriented political establishment in New Brunswick. One of the pillars of that establishment is Johnson and Johnson’s, a Fortune 500 company, whose headquarters sits near that river, and floodwaters have reached at least to the edge of its grounds in the past. Fortunately, most of the growth has been kept well away from the river, and areas close to the river tend to be covered by parks and greenery. This has evolved over time, however, and in the past, the areas near the river were more heavily developed.

The Hyatt Regency, where the conference was held, is itself a product of the redevelopment programs of New Brunswick of the early 1980s, and suffered a flooded basement during Hurricane Floyd in 1999.

The neighborhood that was razed to make the Hyatt Regency was a low-income neighborhood, mostly inhabited by Puerto Ricans. It was known as the Hiram Street market neighborhood.

New Jersey has had a hazard mitigation plan since 1984, but the Federal Emergency Management Agency caused a 2011-2012 rewrite of that plan. The plan formalizes relationships between agencies, stakeholders in emergency management, and the federal government, and outlines various programs and projects involved in hazard management. It also describes the planning process

In order to make emergency plans, the state government first called upon experts in its own ranks to come forth with specific information on risks, strategies, and the ability of people to carry out those strategies. Two mitigation teams then reviewed the strategies outlined in the 2008 hazard mitigation plan and assessed the progress made in implementing that plan.

One of the teams gave interim reports on the emerging 2011 plan. When the plan was completed, it was to be reviewed and approved by the FEMA regional director, who would communicate this approval to the Governor of NJ.  It would be made available to interested parties, including emergency management officials, after that point.

The APA is a professional organization of city and regional planners that boasts a membership of 40,000 people across the nation, 15,000 of which are members of the highly-regarded American Institute of Certified Planners.

They conduct urban planning research, encourage professional development by promoting high ethical and professional standards, educate policymakers, advocate what it believes to be sound policies, and inform the media and the public about the role planners play in city and regional development.