NEW BRUNSWICK, NJ—Chaos erupted on a street in the city’s Sixth Ward Saturday afternoon, as a block party thrown by residents devolved into mayhem.  Meanwhile, local police staged a block away, gathering riot gear and seeking manpower from nearby departments.

NewBrunswickToday.com arrived on the scene shortly after 5:00pm, responding to a report of brutality by Rutgers police against a party-goer. 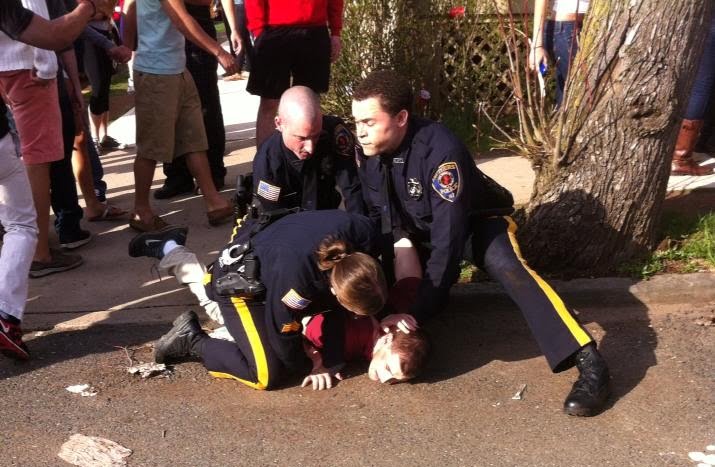 What this reporter discovered was a wild block party spiraling dangerously out of control with dozens of party-goers drunkenly dancing on rooves.

Only one police vehicle was on scene, keeping a distance of about 200 feet from the epicenter of the gathering as the NBPD and RUPD re-grouped in a parking lot one block away.

As bottles were thrown arbitrarily and fights broke out, some party-goers piled furniture in the street and burned it.

Since then, videos and photos of the chaos, and the overwhelming police response have gone viral.  As of today, more than 40,000 people had watched an eight-minute video filmed by this reporter, Sean Monahan, and Lauren Varga.  The video was also aired on television last night.

Opinions vary widely on the behavior of police and the party-goers, most of whom appeared to be Rutgers students who live in the neighborhood.  But most regard the episode as a black eye for the embattled state university that calls New Brunswick home. 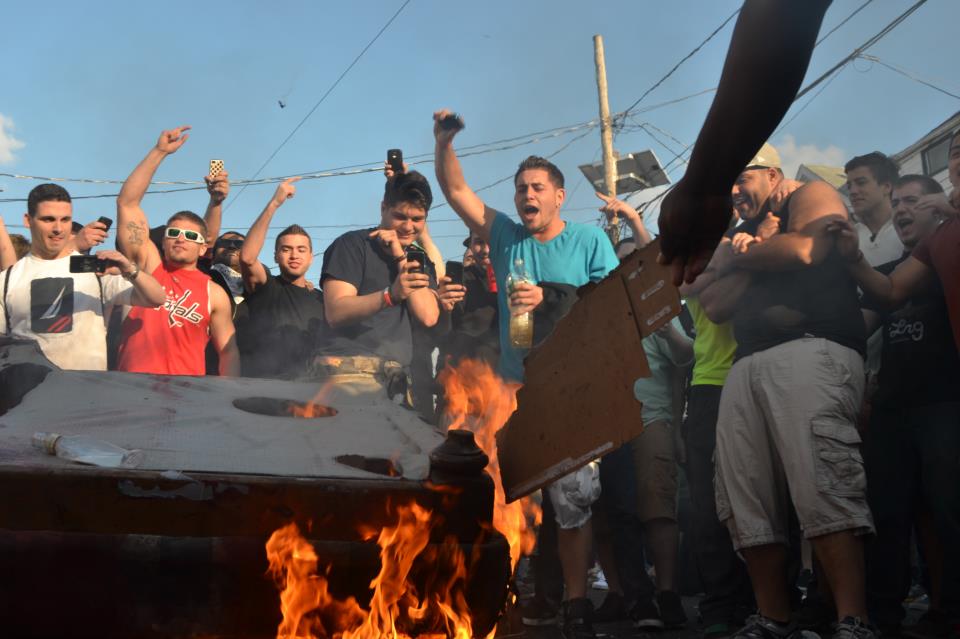 Rutgers spokesman Greg Trevor declined to comment on the incident, saying “all inquiries related to this matter are being referred to Russell Marchetta with the City of New Brunswick.”

Marchetta had nothing to say to NewBrunswickToday.com when reached by phone this afternoon, and declined to say whether he thought the incident was a problem.

“No, I have nothing at this point… We’re letting the police handle it,” Marchetta said.

Marchetta directed this reporter to speak with police Captain JT Miller.  Miller, the department’s spokesman, has not yet returned a phone message and email requesting comment.

But Miller did issue a statement to other press outlets that cover the city.  As reported by New Brunswick Patch.com’s Jennifer Bradshaw, police today released the identities all but one of the individuals arrested in the disturbance:

Haroon Malik, 21, of Princeton, was arrested and charged with Obstruction, Riot, Obstructing a Roadway, and Disorderly Conduct.

Michael Simone, 20, of Whitehouse Station, was arrested and charged with Obstruction, Failure to Disperse, Obstructing a Roadway, Disorderly Conduct, and Underage Consumption of Alcohol.

The report also stated that police estimated more than 500 individuals were at the block party before they marched in with assistance from the police departments of Rutgers University, UMDNJ, North Brunswick and Franklin Township.

UPDATE (2:55am): According to a report on by MyCentralJersey.com’s Everett Merrill, Rutgers University police identified the fourth person arrested, possibly the individual depicted above, as Alec Urbano, an 18-year-old from Matawan, who was charged with resisting arrest, assaulting a police officer and failure to disperse.