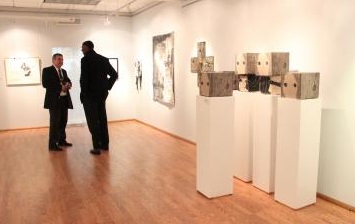 Alfa Art, a non-profit, took time to honor the contributions of their many interns as they opened a new exhibit in collaboration with another non-profit organization, New York City's Sylvia Wald and Kim Po Art Gallery.

The exhibit will be on display at the Alfa Art Gallery location in downtown New Brunswick through March 29.  Its curator is Jeffrey Wechsler, who spent 34 years as curator of Rutgers University's Zimmerli Art Museum.

"The educational opportunities for the interns reciprocate the benefits of a gallery having interns. Most of them are students from local colleges, studying various subjects from fine arts to graphic design to art history."

The interns appreciated the acknowledgment.

"  [Weschsler] believes the non-profit idea is important, because many non-profit institutions are heavily based on the work of interns," said Viviana Montanez, an intern at Alfa Art.

"The Po Kim and Sylvia Ward Gallery uses interns as well, so we thought it would be nice to celebrate that aspect by presenting the two galleries together, " said Montanez

Sumin Hong has now been the gallery manger for a year.

"After I graduated college, I stopped making art. But it's so exciting to work here, because I started to make my own art again," Hong said.

"This is my first show at a gallery. And now I get to see both sides of the process: the gallery's side, and the artist's side."

Chrysta Sotirhos, another intern with Alfa Art, said that learned a lot from working there.

"I didn't understand how much goes into running a gallery. Every technical aspect is so integral in the process," she told NewBrunswickToday.com

Camille Jones said her internship with the New Brunswick gallery has helped her further her career.

Upendra J. Chivukula, one of two elected Assemblymen representing New Brunswick in state government was on hand for the celebration as well.

He told NewBrunswickToday.com that he was proud of the "tremendous talent in this city."

"I think as we are building New Brunswick as a cultural center, I think this type of gallery is going to help us," Chivukula said.  "I think what New Brunswick was a few years ago, compared to what it's going to be in a few years is a real renaissance."