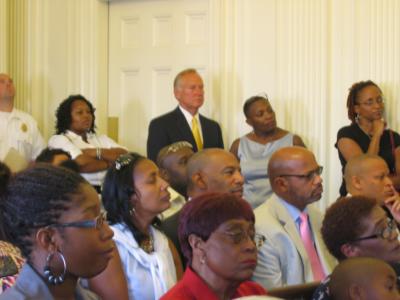 NEW BRUNSWICK, NJ—Undisputedly, he is the most powerful public official in the city.  He has been its chief executive since 1991, and since 1994, every member of the City Council has been elected with his endorsement.

Yet, Mayor James Cahill makes himself scarce at the Council’s twice-monthly public meetings, usually showing up only for special swearing-in ceremonies every few years and sneaking out before the meeting starts.

On Thursday, Cahill broke his streak of not attending the meetings to watch new City Councilman Glenn Fleming be sworn in.  Cahill even took a few minutes to make some remarks before the meeting officially got underway.

Outside of his 3-minute speech, Cahill stayed close by the door to the chambers and left before the Council began conducting regular business.

In April, Cahill defended his consistent non-attendance by pointing out that the city’s form of government does not require him to be there, adding he also wouldn’t want to intimidate the Council with his presence.

The Council President, Robert Recine has taken essentially the same stance on the issue, even going so far as to say he was opposed to the Mayor’s attendance at regular meetings.

“It’s not his role to be at these meetings.  This is the legislative body,” Recine said when asked if he would object to the Mayor showing up.

Nevertheless, Recine warmly welcomed the Mayor to the meeting immediately on Thursday.

“I also notice a distinguished visitor to our Council Chambers.  Mayor Cahill, I leave it up to you as to whether you would like to speak if you would.”

“Council meeting.  You guys can handle it,” Cahill responded.

“Well you have my permission if you wish,” Recine said with a smile, as the audience burst into laughter.

“Very gracious of you,” Cahill said, but declined to speak.  He later changed his mind.

MAYOR ALMOST NEVER GOES TO COUNCIL MEETINGS
An analysis of the Council’s minutes since January 1, 2000 show that Cahill only attended their meetings twice before this week.

On January 21, 2004 Cahill attended to watch new Councilwoman Elizabeth Garlatti be sworn in.  She was being appointed to finish the remaining year of retiring Councilman Joe Schrum’s term.

Schrum had himself been appointed to finish the unexpired term of his predacessor, a fairly common practice in the tightly-run political machine of New Brunswick.

With the advantage of incumbency in 2004, no one ran against the team of Garlatti, Recine, and Jimmie Cook, Jr. in either the primary or general elections.

Four years later, the three defeated Jerry Mercado in the June 2008 primary, and once again faced no challengers in November 2008’s historic election.

Cahill attended a City Council meeting to watch Garlatti be sworn in once again on January 7, 2009.  At that meeting, Garlatti was re-instated as the Council President.  Her mother Patricia Q. Sheehan, a former Mayor, held the bible for her as she took the oath of office.

Earlier this year, the New Brunswick Democratic Organization announced that Cook and Recine would not be running for re-election.  Ten days later, the organization chose their replacements, Fleming and Parking Authority Board member John Anderson.

In the final meeting he attended, Cook emotionally confronted a relative of Barry Deloatch, an unarmed man who had been shot by police two weeks earlier.

He pointed his finger in the face of Jason Taylor, and shouted, “I am ashamed of you,” after an emotional back-and-forth.  Taylor had said he was upset that Cook did not answer his phone the night of the killing.

Only after learning that Garlatti and her new running mates would face an independent challenge in November’s general election did Cook step down from the position.  By that point, he had missed eight consecutive months of meetings, leaving no black representatives on the Council for sixteen meetings straight.

Two days after the author of this article submitted petitions to run for City Council, Cook submitted his resignation, setting off the chain of events that led to candidate Fleming’s swearing-in as a Councilman.

Until 2010, four of the five City Councilmembers got their initial seat at the table by being appointed to fill in for someone stepping down, rather than directly elected by the voters.

AFTER FAILED RUN IN 2000, FLEMING WAITS HIS TURN Fleming, an elder at the Abundant Life Family Worship Center on George Street and a teacher in the Hamilton Township school district, used his preaching and teaching skills to deliver remarks more reminiscent of a Sunday morning sermon than a political speech.

Fleming concluded his empassioned monologue by telling the tale of his journey to being selected by the establishment to run for Council, and to secure the appointment to Cook’s seat.

“As we go forth from this day, it made me reflect when I first thought about running for office in the 1990’s.  I hesitated because I knew it was not my time.

“Then in 2000 when I ran and lost by a landslide, the voters let me know it was not my time.

“And then a few years ago when I stood before the Democratic Committee, came close, but I was still told that it was not my time.”

The story ends with Fleming getting “informed” of his selection by the powers that be, and coming to a realization after finding out he got the job.

“And then finally recently when I was informed I had gotten the appointment, somebody asked me, ‘How does it finally feel that it’s your time?”

And then it occurred to the new Councilman, “It’s not my time, it’s our time!” he declared.

Repeating the “It’s our time” line numerous times, he promised to support and even march for “safer neighborhoods,” “not just good urban schools, but great schools period,” “to rebuild a great community-police relations and better jobs for people,” and “to build a better New Brunswick and move this city forward.”

Fleming had begun the speech by thanking God, his father, and those who fought for suffrage, before declaring, “I humbly stand before you today and I accept your appointment to the City Council in the City of New Brunswick.”

But the man who put his name forward for the nomination, Democratic Party Chairman and TK Shamy, was not at the meeting.  That organization submitted Fleming’s name, as well as Board of Education President Ed Spencer, and former Parks Director James Campbell as three options for the Council to choose from.

As they always have traditionally, the City Council selected the choice that also happened to be running for that very same elected office.

Charles Renda, a retired attorney and lifelong city resident who attends nearly every Council meeting  and frequently criticizes the powers that be, called the move “politics as usual” at the June 17 Council meeting where they made their decision to select Fleming.

For his part, Fleming’s speech hit several points that stuck a chord of inclusion.

“We have a great story to tell but we need other people to feel revitalization and come and bring them into the mix,” he said at one point, appearing to go briefly off-script.

“So we need to make sure that if we break out, we break out a revitalization in this town together.”

Fleming promised to speak up for all residents of New Brunswick, especially the less fortunate.

However, Fleming had little to no voice during the regular business of the meeting.  After his initial remarks, the only word he said was, “Yes.”

Fleming stayed silent and did not ask any questions or make any comments as he joined the rest of the Council in 5-0 votes to approve $2.75 million in borrowing for major projects, and an $8.9 million healthcare insurance contract negotiated by a major donor to Mayor Cahill and the Middlesex County Democratic Organization.

When the author of this article asked the new Councilman about his views on televising the Council meetings, Council President Robert Recine interrupted the questioner and refused to let Fleming answer.

“You can ask him that after the meeting, Charlie,” Recine said.

CAHILL: “GLENN, YOU JOIN AN OUTSTANDING GROUP OF FOLKS” After Fleming’s new colleagues on the Council lauded him with praise, Recine gave the floor to Mayor Cahill, who then proceeded to refer to the newest Councilman by his first name ten times in under three minutes.

Here is the unedited text of the remarks made by the Mayor about Councilman Fleming:

First of all, you all noticed that Glenn is a shy, reserved fellow.  Kinda quiet.  Certainly can preach.  Did a super job.

I think that the remarks that Glenn made is indicative of the type of person that he is, and why it is our time in the City of New Brunswick to take benefit of the talents, energy and wisdom that he brings to this City Council.

What I admire about Glenn is his appreciation of family, of city as a lifelong resident of the City of New Brunswick, and God and church and religion.

Glenn is a good man and, in the world of politics and elected office, good men, good people are critically important.

Elected officials in today’s world, it’s a thankless job.  So someone willing to go in for all of the right reasons and take on the mantle of good government, it’s exceedingly exceptional in today’s world.

So Glenn, I know that your family is very proud of you: your mom, your wife, your two boys, and all your family.  I know Max, who I had the good fortune to know, would love to be here, but he is and he would be exceedingly proud as well.

You should in turn be proud of your family as well, because they have supported you and put you in a poisition in many ways so you can in fact do this.

Glenn, you join an outstanding group of folks.  They have been remarkable and extraordinary and all the things that have been accomplished in the City of New Brunswick.  But as you noted in your remarks, there is much more to do.

So, welcome aboard. We welcome you as part of the team.  We know great things are coming.

Thanks so much, God bless everybody.

Video of the Council meeting is available on the city’s Vimeo page.

Editor’s Note: The author of this article is an independent candidate for New Brunswick City Council, and has criticized the Mayor for so rarely attending the Council’s meetings.

All photographs were taken by Charles Renda, who is also quoted in the article.