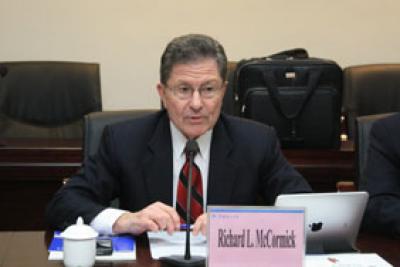 By: Charlie Kratovil
In: Education, Archive

NEW BRUNSWICK, NJ—On Wednesday, the Rutgers University Board of Governors thanked outgoing President Richard McCormick for his service and assigned the school’s chief executive position to Richard Edwards.  Edwards will hold the top job until September 1, when Dr. Robert Barchi will take office.

McCormick went out with a bang, as school officials outlined an ambitous plan to develop several sites in the city’s Sixth Ward in a partnership with the New Brunswick Development Corporation (Devco).

However, a related proposal slated to go into effect in 2014 appears to be an infringement on students’ existing ability to choose their own housing.

The University wants to begin forcing all students to live on-campus for their first two years of college, even if they can’t afford to pay for the housing.  Thousands of students, particularly upperclassmen, currently reside in neighborhoods bordering the campus, where rents are far more affordable than dorming.

According to an article by the Star-Ledger’s Kelly Heyboer, Rutgers officials have wanted for years to force their students to dorm initially, saying students who live on-campus tend to do better in college.  But dorming (including the required meal plan) costs $11,262 for just seven months of housing.

The elected President of the Rutgers student government John Connelly came out against the plan calling it a “pretty misguided suggestion.”

“Rutgers housing already suffers from overcrowding and bureaucratic tie-ups.  This change exasperates both problems,” he said in an email to NewBrunswickToday.com.

“It is also potentially harmful for students such as myself who come from low-income backgrounds and who have moved off-campus in order to save money. In a time of economic uncertainty and climbing student debt, we shouldn’t pursue policies which will cost students more money.”

Approximately 85% of students currently elect to live on-campus during their first year, but a lower percentage renew for a second year in the dorms.  That means that more than 2,000 first-years and an even larger number of sophomores could be affected by the change.

The complex redevelopment plan would cost $295 million and create room for an additional 1,300 Rutgers students to live on the College Avenue Campus.

But it could end up as just another failed pipe dream, as was the “College Avenue greening” plan that preceded it, unless the New Jersey Economic Development Authority (EDA) approves a $52 million tax credit for the project.

Officials said it would be a deal-breaker if the state does not authorize the tax credits.

If the funding comes through, two separate buildings on the flagship campus, including an honors dorm (500 beds) and high-rise apartments (800 beds) would become the first official university housing to be developed in that area in almost twenty years.

“With this, we’ll have the housing stock to accomodate that policy,” McCormick said of the on-campus housing mandate.

Although McCormick’s comments might appear to suggest the housing developments are necessary for the new policy, none of the new housing would open until fall 2015 at the earliest.  According to Heyboer’s report, Rutgers wants to implement the on-campus mandate in 2014.

Rutgers Vice President of Capital Planning Antonio Calcado said that the new housing policy was in the works long before the development plans.  He said that it’s implementation was “not essential to the success of the new projects.”

PROLONGED FAILURE TO KEEP UP WITH DEMAND
During the early 1990’s, the city’s leadership was getting frustrated with Rutgers’ failure to keep up with the rising demand for housing and parking the school’s presence brought to the city.

To alleviate the demand, the city and Rutgers teamed up with Robert Wood Johnson University Hospital to develop University Center at Easton Avenue, a 12-story apartment building that still houses 656 students and 900 parking spaces, as well as a gym and retail stores.

Since then, no new housing or parking has been built by the university in that part of the city, though in recent years private developers have started to build apartments designed with college students in mind.  Most of the new private buildings also included an underground parking component.

The same year that University Center opened, enrollment at Rutgers had dropped 1.2% to 34,436.  This past year, it had risen to over 58,000 students, most of whom studied on the masssive New Brunswick-Piscataway campus.

McCormick announced in his final State of the University address that the New Brunswick campus was “at capacity” and that for the first time in recent memory, enrollment would be scaled back by 4%.  The change means that between 200 and 250 fewer students would gain admission to the state university.

BIG CHANGES PLANNED FOR COLLEGE AVE.
The new redevelopments first announced Wednesday also call for a new parking garage behind Murray Hall, a bike lane down College Avenue, and a new home for the 227-year-old New Brunswick Theological Seminary (NBTS), which would come at the expense of much of its existing campus.

The Theological Seminary would relocate to College Avenue, and their existing campus would become home to Rutgers’ new honors dormitory, a dining facility and the first new academic space on College Avenue in a long time.

“It is nearly 50 years since the College Avenue Campus saw construction of a new academic building. Since 2006, enrollment on the New Brunswick Campus has grown 14 percent, while classroom space has increased by only 3.8 percent,” McCormick said in a letter to the university community announcing the plans.

The seminary’s historic Gardner Sage Library would be spared, but most of the NBTS campus, including the iconic Zwemer Hall would be demolished.

New housing for NBTS students would be built, also by Devco, on the former site of the Rutgers Catholic Center, just off of College Avenue on Mine Street.  The Catholic Center recently relocated to Somerset Street.

Devco has been working to purchase most of the seminary’s campus in response to the worsening financial situation at the seminary.  They had their own plan for developing the NBTS site that did not include Rutgers-affiliated housing.  That plan called for two high-rise apartment buildings that would include retail and parking.

Calcado told NewBrunswickToday.com that Rutgers, whose College Avenue campus completely surrounds the seminary, was not pleased with the Devco plan.  Calcado said the University “interjected [itself] into the conversation,” creating a three-way partnership with NBTS and Devco.

The new Rutgers buildings would be owned by Devco and transferred to the University following a 32-year lease agreement, though details on the financing arrangement were not yet finalized.

CONTROVERSY OVER FAMOUS FOOD TRUCKS
Additionally, Devco would build and permanently own a new 800-unit apartment building and urban park that would take the place of the existing home of the beloved “grease trucks.”  That part of the plan has drawn considerable ire from the press and the public, even though the move may only prove to be temporary.

“Devco fully intends to work with the grease truck vendors to incorporate them in the new project,” the developer said in a statement.

Devco’s President Chris Paladino insists the trucks will be a part of the plan for Lot 8, though he said they were looking at several different options for situating the trucks within the redeveloped site.  In addition to the apartment building, he told NewBrunswickToday.com that Devco is planning to build a 30,000 sq. ft. urban park will include a giant television screen and seating.

The once-mobile food trucks have remained parked in “Lot 8” for decades, ever since the city government banned them from the streets.  As we reported in Jauary, the University’s Department of Transportation Services had previously announced that they were planning to open the prime parking spaces to new vendors in a public bidding process for the first time.

Director of Transportation Jack Molenaar confirmed that his department is still planning to publish a request for proposals (RFP) to determine which businesses will be allowed to set up mobile food trucks on campus, which could mean the end for some of the longtime businesses that have operated in the parking lot.

Although Devco would own the new apartment building, Rutgers Housing and Residence Life departments would still manage the facility, in a similar arrangement to Rockoff Hall, a Devco-owned dormitory that opened in 2005 in the city’s downtown.

TAX CREDITS NEEDED TO MAKE FINANCING POSSIBLE
The state’s Urban Transit Hub Tax Credit has been used to fund eighteen major development projects in seven NJ cities since it was first implemented in 2010.  The vast majority of projects were in Newark or Jersey City, but New Brunswick comes in third place with two projects totalling just over $100 million in tax credits.

The tax credits are only available for projects located within a half-mile of certain train stations.

New Brunswick’s first Urban Transit Hub Tax Credit helped fund two separate developments on both sides of the Northeast Corridor railroad line.  Referred to as the Gateway Center and Wellness Plaza, the former includes luxury housing, a new restaurant, university bookstore, offices, and other commercial spaces.  The Wellness Plaza is under construction, set to open this fall with a new grocery store and fitness center.

Both facilities have large parking garages attached and were spearheaded by Devco and the New Brunswick Parking Authority.

The dual projects earned a combined credit of $76.6 million from the EDA, while promising to create 250 new jobs in place of 75 that were eliminated in the redevelopment, as well as 200 construction jobs, according to the EDA website.

The second project to earn credits through the program has yet to begin construction.

Boraie Development LLC, a city-based developer who recently recieved approval from the Planning Board to build a 16-story luxury highrise at 135 Somerset Street, asked the EDA to increase their tax credit amount to $23.3 million.

The EDA agreed, but sources say that Boraie has not yet secured the remaining financing to make the $77 million project work.

The site currently is home to eight houses, four each on Condict and Somerset Streets, all owned by the Boraie family.

As we reported in February, the Boraie family owns 77 rental units in the city, at 22 different addresses, including One Spring Street, a 23-story luxury high-rise that opened in 2006.

Boraie’s application to the EDA said the new facility would create 50 permanent jobs and a whopping 1,000 construction jobs, the second-highest of the eighteen approved projects.

THE FUTURE OF RUTGERS
McCormick may be leaving the presidency, but he won’t be leaving the payroll.  A controversial and unique agreement will ensure he rejoins the faculty as its highest-paid member.  He will earn $330,000 as a history professor.  The board also named him “President Emeritus” at their Wednesday meeting.

Several of McCormick’s top aides will also be leaving to make way for a new administration, including the Vice President of Student Affairs Gregory Blimling, who sources say is responsible for pushing the on-campus housing mandate.

Blimling told the Star-Ledger the plan to force students to live on-campus for their first two years would mean that Rutgers will “have a much better chance of engaging [students].”

Dr. Robert Barchi is finishing up his tenure as President at Thomas Jefferson Medical School in Philadelphia before he becomes just the 20th President in Rutgers’ long history.  He will make a base salary of $650,000, an additional $100,000 on top of the salary McCormick recieved.

Barchi will also be given a house and car by the university.  He will serve at the pleasure of the Board of Governors for an indeterminate amount of time.