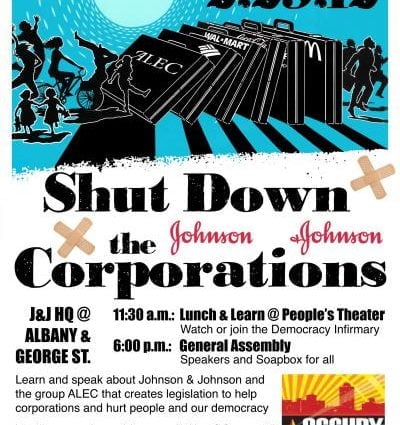 NEW BRUNSWICK, NJ—After being urged by protesters from Occupy New Brunswick, Johnson & Johnson has parted ways with the American Legislative Exchange Council, according to a report on NJ.com.

Occupy New Brunswick and other groups across the country have criticized the actions of American Legislative Exchange Council (ALEC) because of their role crafting and promoting controversial state laws including several that make it more difficult to vote by requiring photo ID, according to the report.

Johnson & Johnson is the first big company in New Jersey to leave ALEC, which is considered one of the biggest lobbyist groups in the world.  ALEC still enjoys backing from the likes of Monsanto, Bank of America, Pfizer and Wal-Mart.

However, over the past few months, companies like Coca-Cola, Kraft, Pepsi and Wal-Mart Stores also ended their membership with ALEC.

ALEC has been under fire by several liberal groups over their controversial role in promoting “Stand Your Ground” laws, which allow more deadly force to be used in self-defense. The issue came to light in response to the killing of Trayvon Martin in Sanford, Florida.

According to the Star-Ledger’s reporting, ColorOfChange.org spent $10,000 on radio ads blasting the voter identification and “Stand Your Ground” bills. The ads specifically targeted Johnson & Johnson and were aired in New Brunswick, Chicago, Washington, D.C., and Sanford, Fla., where Martin was shot.

“They’re funding an organization called ALEC… It’s attacking the rights of black folks, latinos, and workers in states across the country,” it continues.

In response to the sharpening criticism from progressive organizations, ALEC abolished one of its nine “task forces” that create legislation, the same one responsible for the voter ID and ‘stand your ground’  laws.

Last week, Johnson & Johnson stated that it did not “condone legislative proposals that could serve, even inadvertently to the rights or impact the safety of any individual”.

They said their only involvment with ALEC was to help create and support jobs in the U.S.