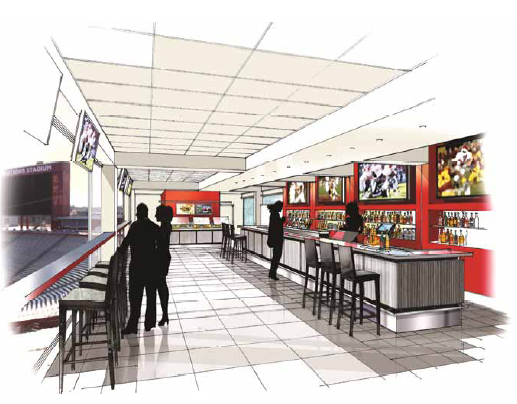 RU Athletics Will Give Concessions Business to Sodexo in Privatization Deal

PISCATAWAY, NJ—Rutgers University’s athletics department is planning to turn over control of their lucrative concessions business next month to a private corporation, according to the response to a public records request filed by NewBrunswickToday.com.

Sodexo, a multinational corporation based in the suburbs of Paris, France, is expected to take over the concessions operations on July 1, according to Tim Pernetti, the Athletic Director at Rutgers.

Both Pernetti and Joe Charette, who heads Dining Services at Rutgers, the department that has run the operation for decades, said the decision to privatize was all business.

“This was purely a business decision made by the university’s athletics department,” said Charette, who is in his first year as director.

Pernetti echoed the “purely business” line in a phone interview yesterday with NewBrunswickToday.com.

“This decision, while difficult, was in the end not a difficult one to make.  It’s purely about business and not at all about the relationship with Dining [Services],” said Pernetti.

Pernetti would not say how much the deal is worth, until a contract is signed.

“I can’t disclose any details until we have a signed contract with Sodexo.”

But a 346-page proposal from Sodexo obtained by NewBrunswickToday.com says that the corporation has offerred to invest over $4 million in the project over the next ten years, and wants to keep 51% of all revenue from football games and 58% at basketball games.

The scope of the deal would include concessions services at High Point Solutions Stadium, the Rutgers Athletic Center, and Yurcak Field, all located in Piscataway.

According to the University’s request for proposals (RFP), “Currently, Rutgers does not sell alcohol inside the venues, (excluding premium seating).”

But the RFP also asked bidders to “propose how [alcohol sales] could be responsibly and effectively implemented should Rutgers ever consider this in the future.”

Sodexho’s proposal says they “have taken the liberty to design a new club space for future consideration by the university.”

But Pernetti said that alcohol sales will continue to be restricted to the expensive “premium seating,” and those in the cheap seats still won’t be able to buy booze.

“While alcohol sales was an element of the [Sodexo] proposal, we don’t plan on expanding it beyond premium spaces yet,” he posted on Twitter in response to NewBrunswickToday.com’s reporting.

The largest part of Sodexo’s $4 million investment is $1.36 million that would go towards an addition to the football stadium that would serve a kitchen facility.

Pernetti said the decision was a part of a “constant effort to be figuring out new ways to generate revenue for the department, and in doing that, reduce the University subsidy to athletics.”

Sodexho expects to generate $59 million in sales over the next ten years, according to the proposal.  It also estimates the University will get a return of $16 million over the same time period.

The proposal guarantees at least $875,000 for Rutgers in the first year, but estimates the University’s return will be $1.34 million.

However, that guarantee is based on “a home schedule of seven home football games.”  Currently, the Rutgers football team only has six scheduled home games for 2012.

There were no financial guarantees in the proposal for the remaining nine years of the agreement.

The atheletics director said that privatizing the food and beverage services at the facilities will most likely not have an affect on non-profit groups who have worked concessions stands to raise money.

“Sodexho’s plans are much like how the operation worked with Dining [Services] in that we have connected them with the various volunteer groups that have participated in helping us with the concessions stands in the past  And our plan is to continue that practice in the future.”

He also said that students will still be able to trade meals from their dining plan for food at the privately-run concessions stands.

“And you know we are working very closely with Joe [Charette] and Dining Services to make sure we have a structure in place that will make sure that students will be able to continue to use meal swipes at the games.”

Pernetti also denied the rumor that Dining Services wasn’t given a chance to bid on the lucrative contract.

“They were absolutely given an opportunity to bid.”

According to the public records request, only Sodexho and Milltown-based Legends Catering and Sodexho put in bids for the contract.

Charette said that the end of the long-running arrangement with athletics will not mean layoffs for his department.

“We only have two permanent concessions employees and they will be relocated to one of our new operations opening in the fall.”

CORRECTION: An earlier version of this story implied that alcohol sales at High Point Solutions Stadium would be expanded under the privatization agreement. Alcohol will continue to be served in “premium seating” areas only. We regret the error and thank Director Pernetti for clearing this up.