NEW BRUNSWICK, NJ—Proposed city laws must be approved twice by the City Council and then signed by the Mayor before they take effect.  Most of these laws, also called “ordinances,” are introduced in New Brunswick’s City Council and passed unanimously without a fight.

But one law that all five members supported on “first reading” drew enough criticism at a required public hearing for its “second reading” to force the council to back down and elect not to pass no law at all.

Instead, the result of citizen opposition to O-071109 was a new program that got Rutgers University and the City of New Brunswick to work together for a change.

City residents who are also Rutgers students still have time to sign up for the PROJECT: MOVE OUT program, which provides free bulk garbage pick-up for students living in the city.  The deadline to sign up for a pick-up is Thursday May 24.

Additionally, drop-off locations will be established between May 29 and June 1 on the College Avenue and Cook/Douglass campuses of the University.  Rutgers has said they will work to re-use and recycle as much of the waste as possible.

The ordinance, proposed by new City Councilman Kevin Egan, would have ended the long-standing policy of city garbage workers picking up “bulk” garbage items such as floor lamps, tables, and couches during a proposed a “moratorium” from May 10 to June 10 every year.

The majority of leases in the city, many held by Rutgers University students, end during that same period of time, which causes an increased demand for garbage pickup of bulk items. 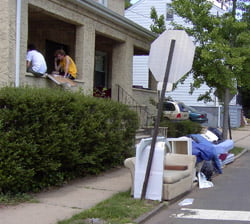 “[The end of the school year] causes too much congestion, garbage, and other things for the residents of the City of New Brunswick,” said Councilman Egan at a July 6 Council meeting.

City Attorney Bill Hamilton called Egan’s proposal “better than what we’ve got now” at that same meeting, but it never ended up becoming law thanks to citizens who vocally opposed it.

Instead, the city’s policy of allowing each residential unit to dispose of three bulk items on regular garbage days will continue for the forseeable future.  As always, residents are supposed to call ahead to the Department of Public Works (DPW) if they are disposing of bulk items.

But that requirement to call has hardly ever been enforced and DPW workers usually pick up any and everything left at the curb, as Rutgers students and other tenants turn over their residences en masse to new occupants every year around June 1.  It’s unclear if enforcement procedures will change this summer.

The first time the City Council voted 5-0 in favor of the ordinance, they were not required to ask for public comments or even reveal exactly what the ordinance does.  But things weren’t looking good after several members of the public raised concerns.

The Council approved O-071109 at their July 23 meeting shortly before two people spoke against the idea of a moratorium and two more asked questions about it during the public comment portion of the meeting.

“I think maybe we can work something out when we’re going to have an opportunity for the residents to take their garbage up to the Department of Public Works,” Councilman Egan said in response to a question from Democratic Committeewoman Amy Braunstein.

The Department of Public Works is located at 400 Jersey Avenue, far from all of the Rutgers campuses and the surrounding neighborhoods that are predominantly occupied by student renters.  Egan’s initial proposal would have only offered dropoff to residents from the hours of 8am-12pm on Saturdays only during the moratorium.

Everyone else would have to pay for private haulers to take their bulk items, or face steep fines from the city.

Fines of $250-$500 for a first offense would have quickly escalated to $2,000 for a third offense.  In all cases, the original proposal called for an additional $100 per bulk item, but that was later revised to $250 for all items.

Democratic Committee Sean Monahan said he was philosophically opposed to the ordinance.

“I want all garbage out on the street so we can pick it up because that makes sense,” Monahan warned, saying the proposal would create a “perverse incentive” for residents to hide their garbage in their homes or in “no man’s lands” between properties.

“I understand what you’re saying, but I think people also have a responsibility, it’s not just on government,” Council President Robert Recine told Monahan.

“The public hearing is in two weeks,” he added.

The next morning, the City Clerk’s office made available a copy of O-071109 to the public, where it was revealed that the law called for violators to face fines of up to??.  The expectation was that landlords would pass along the expensive fines to their tenants or deduct it from their security deposits.

Fourteen of the statements given during the garbage moratorium’s August 3 hearing by members of the public were against it, including one by the author of this article.  Another five people spoke in support of the ordinance, including two Democratic Committee members, and an aide to Mayor James Cahill.

“The ordinance should not be delayed… The fact that a homeowner has to do without 30 days of bulk pick-up because of a problem generated by certain property owners is unfair, but I’m willing to do that,” said Chris Butler at the August 3 public hearing.

Butler makes $81,000 a year as a “Management Specialist” in the Mayor’s Office, according to MyCentralJersey.com’s DataUniverse.

“Frankly I think that your ordinance is well thought out and you’re still being far too generous.  To have residents be able to have curbside pick-up eleven months out of the year far surpasses most municipalities in the area,” he said.

He was also the only member of the public to speak more than once during the hearing. 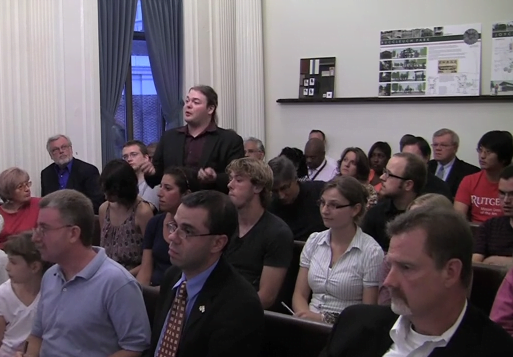 But most of the speakers were opposed to the ordinance, including four Democratic Committee members, two former members, a representative from the New Jersey Association of Realtors, and the President of Rutgers University’s 30,000 undergratuates on the New Brunswick campus.

Committeeman Monahan was one of the most opponents of the ordinance that night: “To me, I view this as privatization… What is happening is the city is abdicating its responsibiltiy to take care of these sanitation needs.”

“By forcing the New Brunswick residents to hire private garbage haulers, that solution will ultimately cost more,” he told the Council.

Speakers at public hearing (in order):

Full video of the hearing is available at the following link: http://vimeo.com/27311406

After Butler’s second statement, Councilwoman Elizabeth Garlatti interjected to ask if any members of the Rutgers University administration were present in the packed chamber.

To the surprise of nearly everyone in the room, for the first time in years, a representative sent by the highest levels of the administration was, in fact, in attendance.

Peter McDonough, a former Boro Councilman in Pennington Township and newly-minted Vice President of Public Affairs at Rutgers University rose and identified himself.

“Is it possible that we can bring the University administration into this problem-solving session?” asked Garlatti.

“Whether you do this ordinance or not, we are going to work to mitigate the impact on the students and help alleviate the problem,” he added.

Recine was skeptical, saying that Rutgers had a bad track record of working with the city: “Is there any assurances?  We’ve gone down this road with Rutgers University in the past where they have said yes they are going to help and then they don’t.”

“I can’t give you any assurance beyond my word,” McDonough responded.  “I’m new, five months on this job.  I’ll do my best to make sure there’s some follow-up and some follow-through to make this happen.”

The city’s attorney William Hamilton suggested that the council adopt some amendments to the law, but schedule it for a hearing at a later date in September.  The ordinance never did get another hearing. 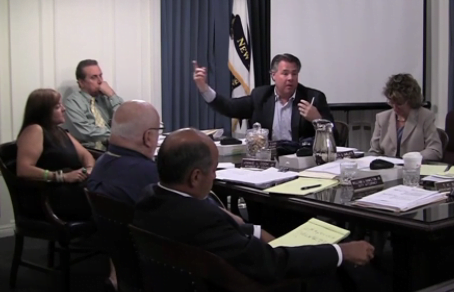 Then Egan launched into an epic speech in support of his law that was about to be killed.

“This moratorium affects everys citizen in New Brunswick.  We’re not singling out any particular group, any particular individuals,” he said in an effort to distance himself from the notion of attacking the sizable student population of the city.

“I’ll be glad to to [delay the ordinance] for thirty days and let’s bring in all the solutions.  Let’s hear what you’ve got to say.   But at the end of the day we’re going to do something about it.  Because it’s time–it’s over.  We’re not putting up with it no more.”

After one more speaker who only identified himself as “Glen” called the hearing a “kum-ba-ya” moment, the Council tabled the ordinance and scheduled it for another hearing 56 days later.

“I think Mr. Patterson has the lead on this,” Hamilton announced, referring to the city’s Planning Director Glenn Patterson, who had given a presentation on the bulk pick-up law before public comments were accepted earlier that evening.

“No Mr. Patterson does not,” Patterson responded from the gallery, to roaring laughter, as he too tried to distance himself from the unpopular law.

The ordinance was scheduled for several subsequent hearings, but in each case they were called off at the last minute.  At a Council meeting held eight months after the original hearing, Chris Butler announced the details of the new program which Rutgers would foot the bill for.

The 21 public comments at the original hearing were by far the highest of any of the city ordinances adopted that year.  Each ordinance requires a public hearing before it is adopted for a second and final time by the Council.

Editor’s Note: Sean Monahan is the publisher of NewBrunswickToday.com and Amy Braunstein is a writer for the same.  The author of this article worked together with both of them to help defeat the proposed moratorium on bulk pick-up.