NEW BRUNSWICK, NJ—New information in yesterday’s Star-Ledger revealed that more than $31,000 has gone missing from a secretive campaign slush fund known as “Women For Good Government.”

It was one of at least ten different political fundraising committees based in Central Jersey that had strikingly similar lists of donors and very few expenses.  The money was usually passed on to the campaigns of candidates for office, and in many cases, appears to circumvent pay-to-play reform laws adopted by several Middlesex County towns.

According to the Star-Ledger’s Matt Freidman, the newspaper has copies of bank statements that show Women For Good Government’s account, which was supposed to have at least $26,000, has just $26.01.

Women For Good Government’s treasurer, Deborah Celey, has retained an attorney, William Strazza, who said he believes his client is under investigation for the missing funds.

“I have reason to believe there is an investigation right now as to Deborah’s role as treasurer,” he told Freidman, who broke the story wide open on Easter Sunday when the Middlesex County Democratic Chairman implicated State Senator Bob Smith as supervising the dubious committees. Perhaps more surprising is the fact that Tom Kelso, the county’s official attorney, has been looking into the matter, seemingly on behalf of Women for Good Government.

He said, “It’s likely that law enforcement is involved,” and he would know: his former law partner is the county prosecutor.

Yet, a spokesman for the MCDO told Freidman that the Middlesex Democrats were uninvolved in the PAC and had “no direct knowledge” of it.

And Kelso asserted he had been asked by a mystery individual to look into it, not Korbman.

Kelso won’t tell the Ledger who asked him to help, citing attorney-client privelege, but he has apparently been looking into the irregularities with Women For Good Government.

The organization has not filed its required disclosures or statements for over a year.

Not only is Tom Kelso the county counsel for Middlesex County’s government, he also serves as the Executive Director at the New Brunswick Democratic Organization, and he’s also a partner in a law firm, where he frequently represents applicants who go before the city’s zoning and planning boards.

As Executive Director of the NBDO, Kelso is part of an exclusive group that gets to pick the candidates who run for Mayor and City Council in New Brunswick.  Since 1994, their choices for candidates have gone on to win every municipal election in the city.

Prior to 2011, Celey served as the Vice Chair of the organization.  Both her and Kelso served together on the all-important “Executive Committee.”

Together, these eight individuals interview and recommend who should get the party’s endorsement to the rest of the committee, which almost always approves.

This March, they interviewed applicants who sought the three City Council seats up for election in November, and selected Glenn Fleming, John Anderson, and incumbent Elizabeth Garlatti.  Their decision earned the approval of the larger committee, which consists of the 56 winners of neighborhood-based elections held every two years during the Democratic primary.

Kelso read the resumes of the candidates aloud at the party’s March meeting, before asking for an up-or-down vote of the full committee.

None of the candidates seeking office attended the meeting, but they were nevertheless endorsed by the NBDO.

In addition to serving as the county’s top attorney and the NBDO’s executive director, Kelso also runs a lucrative city-based law practice along with partner Patrick Bradshaw.  His prior law partner was Bruce Kaplan, who now serves as the Middlesex County Prosecutor.

A call to the daytime phone number Celey listed on Women For Good Government’s paperwork was answered by a woman who denied she was Celey when she learned who was calling.  The night-time phone number was not in service.

TK Shamy, the NBDO’s Chairman for many years, did not return messages left yesterday at his office and on his cell phone.

WHO IS DEBORAH CELEY AND WHERE DOES SHE LIVE?

In 2009, Celey sought re-election to the New Brunswick’s Democratic Committee.  She defeated her opponent, Kristen Clarke, who served as the student representative to the Board of Governors at Rutgers University for the 2011-12 school year. 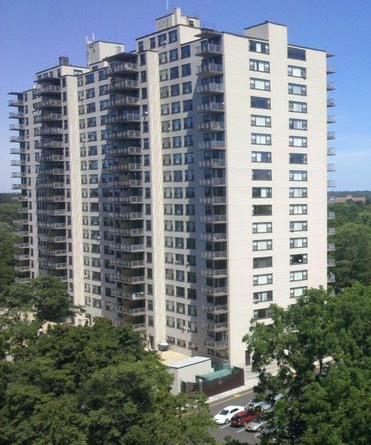 However, Clarke discovered during her campaign that Celey no longer lived in Ward 6, District 6, the area they were competing to represent on the committee.

Celey was registered to vote at the same address her campaign paperwork and Women For Good Government’s indicated: 1050 George Street, the Colony House luxury apartments.

In an effort to hold a “meet the candidates” event in the lobby of the Colony House, Clarke and her running mate attempted to reach out to Celey.

But Clarke was told by the management that Celey had moved out years ago.

“The woman who was in the front office there said that Deb Celey didn’t live there anymore and hadn’t lived there in a few years,” she said in an interview.

Under pressure to prove she lived in the city, Celey filed a new voter registration form listing her address as 2 Parkview Drive.

That home is owned by an older married couple that owns Anderson Funeral Homes, with locations in Trenton and New Brunswick.

Clarke said she visited the Andersons home, where Celey claimed to be living “with friends,” and was given a negative but vague response when she asked if Celey resided there.

“I believe I spoke to the housekeeper and she just shook her head and said no.”

At the committee’s reorganization meeting, Celey tied Yolonda Baker 28-28 in the internal election for Vice Chair.  Freshly re-elected Chairman TK Shamy broke the tie, and put Celey back in office for another two years.

Celey has been a vocal supporter of Mayor Cahill over the years and been appointed to serve on numerous city boards and commissions by Cahill, including the Zoning Board of Adjustment, where Celey served until 2011.  She was quietly replaced at the beginning of this year.

She was present and voted in the affirmative on all five applications before the Zoning Board on the evening of December 19, 2011, her last meeting as a member.

She also serves on the city’s Library Board of Trustees according to the city’s website.  Her term is not set to expire until December 31, 2014.

But it appears her primary role was more than likely fundraising: Women For Good Government raised over $300,000 in just over three years, according to the Star-Ledger.  Celey was one of two people officially linked to the PAC, and the only one responsible for its bank account.

“There’s nothing official that’s going on that we know of.  So we’re not going to comment unless there’s something official,” he said in a phone interview yesterday afternoon.

Editor’s Note: The author of this article was a volunteer on Kristen Clarke and Yolonda Baker’s campaigns for Democratic Committee in 2009.

This is the sixth in a seven-part series.  Click here to go back to the beginning.

The seventh and final installment is coming soon to a computer or mobile phone near you, only at NewBrunswickToday.com.