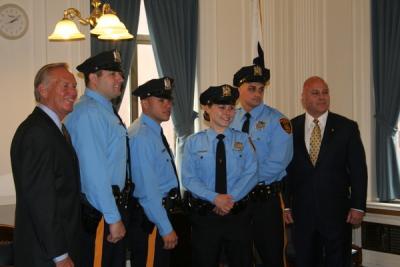 NEW BRUNSWICK, NJ—The city’s mayor swore in another four police officers that the city has picked up from Trenton’s force on May 22.

A total of seven police officers were hired this year using a grant from the federal government.  All seven came from Trenton, where Mayor Tony Mack laid off 111 officers last year.

The officers sworn in this month are: Victor Delgado, Erika DiMarcello, Sean Freeman, and Robert Runof.  DiMarcello and Runof served 4 ½ years in Trenton’s PD, while Delgado and Freeman only served 1 ½ years.

They join three others who were laid off by Mack who were hired by New Brunswick and sworn in on January: Elfi Martinez, Jonathan Rivera, and Marvin Shaw.

In 2011, the city used the same grant to hire seven new cops who had been laid off by neighboring Franklin Township.

Trenton recently hired a new police director and an aide to New Brunswick’s Mayor James Cahill was nearly selected for the prestigious position.

Michael Beltranena, a “management specialist” in the Mayor’s Office and former police director in New Brunswick and Montgomery, was not hired because he would not move to Trenton, according to a report by NJ.com’s Alex Zdan.