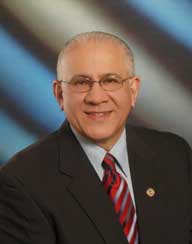 And that's pretty much all that happened at New Brunswick's "Women For Good Government," one of ten bare-bones fundraising operations in New Jersey that have been linked to the Middlesex County Democratic Organization and two state legislators in recent news reports.

In 2008, Women For Good Government filed paperwork naming a new Chairwoman, Amy Papi.  Papi, of East Brunswick, listed her occupation as "Governmental Affairs Agent," but listed her employer as "self-employed-consultant."

Papi, who served as Chairwoman of the PAC until it ceased operations, declined to tell the Star-Ledger's Matt Freidman who was actually responsible for the PAC:

"A few women who got together.  I'm not going to go and give names."

Though it is unclear exactly what Papi's involvement was, the organization flourished under her leadership.

Francis X. Gartland, a 70-year-old former insurance broker from Baltimore, fell hard.  First, he got in trouble for bribing the superintendent of the state's fourth largest school district, Toms River, to get and maintain the district's lucrative insurance contract.

Then it was discovered that Gartland had also been bilking the city government and the school district of Perth Amboy out of $2.6M.  He also was indicted for illegally disguising the source of contributions to that city's mayor.

Employees of Federal Hill, and the company itself, gave a $77,730 combined to five of the ten suspicious Political Action Committees (PAC's) in Central New Jersey.  A similar group  based in Mountain Lakes, Committee for Efficiency in Government, also was a frequent beneficiary of contributions from Federal Hill and its associates.

Federal Hill was found to be stealing from Perth Amboy's taxpayers by deducting fees for nonexistent "wellness" programs from the paychecks of all city and school employees.

In 2006, Vas mounted an unsuccessful campaign for US Congress.  Gartland and Thomas O'Leary, brother of ex-South Amboy Mayor John O'Leary, were both indicted for recruiting "straw donors" for the campaign.

"Straw donors" are not really donors, but officially take credit for giving the money to obscure who really is making the donation.  This allows candidates to exceed contribution limits and hide the sources of their financial support.  It is also a federal crime.

In Women For Good Government's first spending report to ELEC, it revealed its first two "good government" priorities.  On May 18, 2007 they passed along, or "wheeled," $10,400 to Edison Democrats 2007, the official campaign committee for four Township Council candidates, one of whom was a woman.

One month later, the PAC cut a check for $10,000 to "Committee Against Recall" in Franklin Township, but it was never cashed according to the report.  Later that year, a check for $8,200 was sent to "Recall Defense Committee."

Ellen Ritchie, who represented the Township's Third Ward on the Council, had drawn the ire of residents that opposed an affordable housing and big box retail project slated for their neighborhood.  They were able to secure a special election to oust her from office in November 2007.

The Recall Defense Committee was Ritchie's was her official fund to maintain office.  It only reported seven donations, including $100 from herself, and $1,000 from a business owner.

The other donations all came from political committees including Somerset County's Democratic Organization.  But the bulk of Ritchie's funds came from the very same PAC's suspected of coordinating with each other and powerful elected officials.

Two weeks later, New Expectations PAC, another very similar political committee tied to the Assemblyman, gave another $8,200 to Ritchie, meaning that the secretive PAC's gave her $24,600, more than two-thirds of the campaign's total funds.

Ritchie had been targeted for removal from office because of her support for a controversial large-scale development that would include 660 residences and a Home Depot, in a rural area near the township's border with New Brunswick.  Ritchie was a former Planning Board member and represented the ward where the development was proposed on the Council.

Edgewood Properties is the owner of New Brunswick's Walgreen's pharmacy, and the developer of a gated community on Remsen Avenue, Fulton Square.

The Walgreen's in New Brunswick opened in 2004.  However, the surrounding "Towne Center" was supposed to include a housing component and a supermarket, but neither were built.

Both of Morris' projects were granted 30-year tax abatements by the New Brunswick City Council.

The next two reports filed with ELEC detail how the organization surpassed its self-reported expectations nearly seven-fold, raking in a total of $65,840 in 2007.  It spent two-thirds of that sum giving to various campaign committees, and banked the rest.  Aside from $60.39 on "checking supplies," the organization did not report any operating expenses or reimbursements.

Phillips won re-election and served most of his term before resigning due to health issues.  He has continued to serve as Middlesex County's Treasurer to this day.  Gilmore, who was seeking a third term, lost.

But that was just a piece of the action.  While millions were spent on presidential and gubernatorial elections in NJ, hundreds of thousands of dollars flowed from PAC's like Women For Good Government to local-level candidates and municipal party organizations.

Women For Good Government also gave $3,500 to then-Mayor of East Brunswick Bill Neary's campaign fund.  He returned the donation after deciding not to seek re-election.

Recipients of Women For Good Government's funds all had one thing in common: They were Democrats running for office in New Jersey.

Towns with "pay-to-play" reform laws on the books include Sayreville, East Brunswick, South Brunswick, Milltown, and Edison, which adopted the reform in 2006 by way of a citizen-initiated referendum.

Prior to 2009, there was at least one female member of the tickets supported by Women For Good Government's donations to municipal party organizations.

While the in-county donations to all-male tickets are hardly scandalous, Women For Good Govenment's money also flowed to some peculiar places outside Middlesex County, each time funding male candidates exclusively.

A whopping $16,000 was sent to four male town council candidates in Ocean County's Berkeley Township shortly before the November election.  A PAC known as Pride in Berkeley also received a transfer of $7,200 from Women For Good Government.

Also, 40 miles away in Bergen County, an incumbent male freeholder named David Ganz somehow got the organization to give him $2,600.  A donation in the amount of $5,000 was also made to Bergen County Young Democrats, a PAC based in Teaneck, whose donors are often one in the same with Women For Good Government's.

On March 3, 2010, Women For Good Government gave to the campaign funds of two women on Middlesex County's Democratic ticket, but none to their male running mates.

Editor's Note: This is the fourth in a seven-part series.