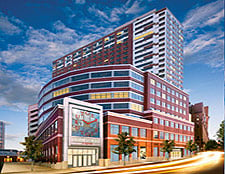 By: Charlie Kratovil
In: Education, Archive

HIGH ATOP NEW BRUNSWICK, NJ—The newest and tallest highrise in New Brunswick is looking for residents, so long as they don’t make either too much or not enough money.

The building’s residential portion, marketed as “The Vue,” offers 150 apartments, both 1 and 2 bedroom-units, on floors 9 thru 20 of the skyscraper.  The units will be managed by Philadelphia-based Pennrose Properties.  Additionally, floors 21 to 23 consist of 42 condominiums with similar floorplans that will be constructed with superior materials.

Twenty percent of the residences in the skyscraper are designated “affordable housing” for individuals who make below $36,300 annually or families that make less than $42,000 annually.  However, the remaining rentals are only open to those with a minimum annual income of $64,440.

Perhaps concerned that Rutgers University students bankrolled by their families might dominate the building, Pennrose and the building’s developer, New Brunswick Development Corporation, instituted a rule where renters must make at least three times their rent in legitimate income.

Pennrose will not allow someone else who will not be living in the unit (for example, a student’s parent), to co-sign.  The new building is located across the street from the University’s primary campus,  and it’s ground-floor will be the new home to a new University bookstore operated by Barnes & Noble.

Unless one qualifies for one of the 38 affordable units, the costs to rent at The Vue will be the highest in the city.  One-bedroom apartments are currently being offerred for $1,790 to $1,910 per month, depending upon the size and layout of the unit.  Two-bedroom units are being offerred for between $2,280 and $2,545.  And that doesn’t include parking, utilities, or fees to use the building’s lounge and gym.

Parking is available for the bargain price of just $175 per car per month in an adjacent parking deck owned and operated by the New Brunswick Parking Authority, which expects to re-locate their headquarters to the new building.

Renters and condo owners will pay for their electricity, cable TV, internet, and phone service.  A one-time $250 fee to use the gym and lounge on the ninth floor is currently being waived.

The asking price for the condominiums varies between $272,000 to $478,000.  Originally, the building was intended to be 100% condominiums.  The vast majority were changed to rental units due to the decline in the housing market.

Condo buyers will get a break on their municipal property taxes for the next 29 years thanks to a 30-year tax abatement approved by the New Brunswick City Council in 2010.  They are, however, responsible for a flat $4,500 fee annual fee for their water and sewer service and Homeowners Association Fees of at least $250 annually.

The remainder of the building will be commercial property, including a Brother Jimmy’s BBQ restaurant with a liquor license, and several floors of office space.  The Barnes & Noble bookstore will include a Starbuck’s Coffee, just .2 miles away from New Brunswick’s existing Starbuck’s location.

Anyone interested in the regular rental and condominium units can call the main hotline at The Vue, 1-732-828-0111.  Those interested in applying for an affordable unit are directed to contact Dorothy Reardon at 732-828-1739.

A link on the state website that is supposed to contain a list of affordable rental properties is not currently working.