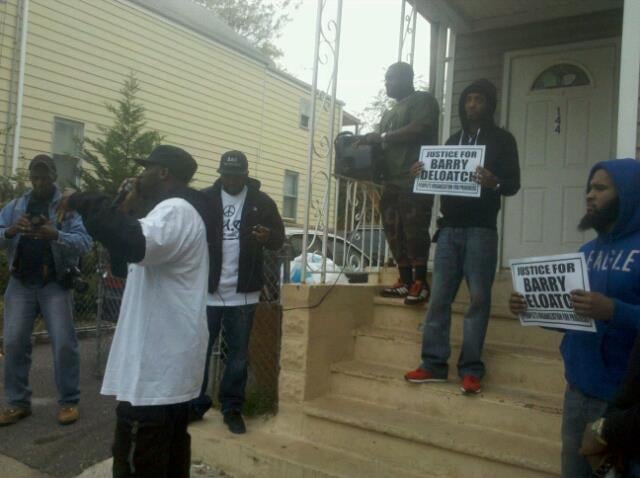 SOMERSET, NJ – Barry Deloatch, Jr., 24, of Piscataway, was seriously injured when a vehicle he was a passenger in crashed and overturned, bringing an end to a brief high-speed police chase early Thanksgiving morning.

Mr. Deloatch underwent surgery yesterday for internal bleeding and relatives report that he is in stable condition at University Hospital in Newark.

Just over two months earlier, Mr. Deloatch’s father of the same name, a 47-year-old city resident, was shot and killed by police, an event that galvanized opposition to police brutality in New Brunswick.

The driver of the vehicle is identified in police radio transmissions as Anthony McLaughlin, with an address on Jennings Court, in the Robeson Village public housing complex.  He and Mr. Deloatch face felony charges for possession of a gun police say was in the vehicle.

Rutgers Police Chief Rhonda Harris told Patch.com’s Jennifer Bradshaw that the vehicle in question was involved in a “high-risk traffic stop” by University police in front of Robert Wood Johnson University Hospital (RWJUH) on Somerset Street, shortly after a man was shot two blocks away, at the intersection of Easton Avenue and Condict Street.

At about 2:20am , police received a phone call to report the sound of four gunshots fired in the vicinity of Easton Avenue and Somerset Street.  An RUPD officer quickly discovered a shooting victim and several witnesses on nearby Condict Street.

Shortly thereafter, both RUPD and NBPD units gave chase to Mr. McLaughlin, as he headed south on Somerset Street, along the county line.  Police reported speeds of about 70 miles per hour, before Mr. McLaughlin’s vehicle hopped over a curb, hit a building, and crashed into a utility pole near Sunny’s Seafood Restaurant, less than 2 minutes after the pursuit was first reported.

Chief Harris also told Patch.com that witnesses had pointed to the car carrying Mr. Deloatch as being involved in the shooting.

At the second location, Harris said that witnesses pointed at a car leaving the scene as being involved in the shooting, and the officer pursued the vehicle until it came to a stop on Somerset Street in front of Robert Wood Johnson University Hospital.

The police radio tapes are not clear on exactly how close Mr. McLaughlin’s vehicle or its occupants ever came to the site of the shooting, nor is any mention made of the felony traffic stop at RWJUH.  Here’s how Chief Harris described it to MyCentralJersey.com’s Gene Racz:

Harris said that because the vehicle was leaving the scene of a shooting, [RUPD Officer Brian] Ruditsky executed a felony vehicle stop as a New Brunswick police car pulled up behind them. As voice commands were issued by officers, Harris said the suspects’ vehicle then fled the scene again and was pursued before crashing on Route 27 South.

Not only is there no mention of this important, albeit brief, traffic stop on the tapes, but the radio transmissions fall short of establishing a clear connection between Mr. McLaughlin’s vehicle and the shooting.  In fact, they may have the potential to exonerate Mr. McLaughlin and Mr. Deloatch in the shooting.

On the tape, less than one minute after the pursuit was announced over the police radio, an officer at the scene of the shooting gives the only description we hear of the shooter.  The next voice attempts, perhaps incorrectly, to associate the vehicle chase with that description of the shooter:

OFFICER 1: “I got a witness that says the guy with the gun had like a, uh, overalls with dreads.  Black male, in the area of Giovanelli’s.”

OFFICER 2: “I believe Rutgers tried to stop that car, they’re chasing him now down Somerset Street.”

Barry Deloatch, Jr. does not have dreadlocks.  It is not immediately clear whether or not Mr. McLaughlin sports that particular hairstyle, though he does not appear to do so in photos on his Facebook page.

While the police recordings speak of one person shot in the leg, Patch.com reported that a 26-year-old man from North Brunswick was shot in the mid-section, and another North Brunswick resident was injured in an aggravated assault. On the recording, three ambulances were called to the scene as a precautionary measure.

Mr. Deloatch and Mr. McLaughlin have not been charged with the shooting or the assault.  MyCentralJersey.com reported the following remarks from NBPD Sgt. Mark Pappas:

“The suspects may or may not have been involved in the shooting,” New Brunswick Police Department spokesman Sgt. Mark Pappas said. “There is an ongoing investigation to determine if there is a link between that motor vehicle stop and the disturbance and/or shooting.”

After he was released, Mr. McLaughlin was jailed on two gun charges and eluding police.  His bail was set at $75,000 with no 10% option, according to a report on MyCentralJersey.com.  He did not suffer serious injuries in the crash.

The same report said Mr. Deloatch remained hospitalized following his surgery, but faced a $50,000 bail, also without the 10% option, on two charges: unlawful possession of a weapon and obstruction of the administration of the law.

MyCentralJersey.com reported that both were charged with weapons offenses because it could not be determined who was the owner of a handgun found in the car.

About two hours later, a 24-year-old city resident was grazed by a bullet while driving about a mile away from the site of the original shooting.  The victim drove himself to RWJUH, after being shot near the intersection of Remsen Avenue and Welton Street, according to a report on Patch.com.  It is not clear if the shootings were related.

The RUPD and NBPD are working together to investigate the initial shooting, with the NBPD taking the lead role.  However, Patch.com reports RUPD will be spearheading the charges related to the pursuit.  Franklin Police were also notified because the chase and crash occurred on the Somerset County side of the highway.

The Middlesex County Prosecutor’s Office continues to investigate the September 22 shooting death of Barry Deloatch Sr..  No charges have been filed and the two officers responsible remain on paid leave.